Bridget McGinty started her culinary career working for restauranteur, John Minnillo at the famed Ninth Street Grill in The Galleria in the early 90’s. Chef Karen Small, Alice Waters’ Cleveland counterpart, ran the kitchen and was perfecting a “Farm to Table” philosophy long before it became mainstream. Working her way from busser to bar manager over the course of 8 years, Bridget enjoyed and excelled at all front of the house operations, but was always trying to see what she could learn from the back of the house. She began cooking at home and before long was hosting memorable dinner parties for friends and family.

When Ninth Street Grill closed abruptly, Bridget joined the elite rank of servers at Johnny’s Downtown. Her love of food and cooking became an obsession as she was exposed to duck, veal, fresh pasta, risotto, demi glace and other decadent sauces! Johnny’s owners and chefs encouraged her to attend culinary school. In 1998, Bridget graduated from Pennsylvania Institute of Culinary Arts, after a successful internship at the Baricelli Inn under Master Chef Paul Minnillo.

Disheartened by the abusive environments of many kitchens, the grueling hours and terrible pay, Bridget decided to open a restaurant of her own, where the health and happiness of her employees and customers were at the heart of every decision and recipe. She returned to the front of the house at Blue Point Grill to earn the cash needed to do so. With owners who truly do “whatever it takes” and the leadership of Doug Petkovic, Bridget had many fine examples of how to run a restaurant well.

Tastebuds opened in 2001 in a shared hallway in an Asian plaza, which she quickly outgrew. Two years later, she risked it all to renovate the all-but abandoned warehouse space where it currently resides. Bridget is also a writer and a painter and resides in Tremont with her young son. 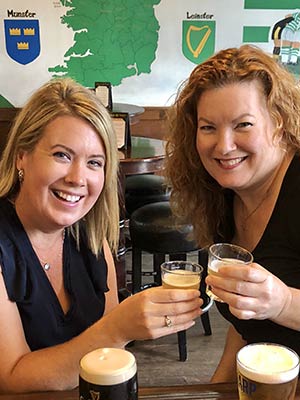 Such an awesome lunch spot that is just slightly off the beaten path. The Greek pasta is so good and is filled with fresh veggies. All of the salads are good. It is slightly annoying that they are pre-made because you can't make any substitutions. The corn bread is good too.

Do you ever eat lunch? If so, you must eat at Tastebuds! Greek pasta is light and fresh, tomato soup is rich and filling, black bean soup is the BEST/only black bean soup I've ever tried, pizza is unique and slightly crispy, salad dressings homemade and full of flavor. My dad insists on this place any time we're in the area at lunchtime and gets the Greek pasta every time.

This is my favorite go to lunch spot when I'm on the east side. It is set up cafeteria style, so you just go in and get what you need, nice and quick! They have a lot to choose from (amazing salads, wraps, pizza, burritos, salmon dinners, chicken entrees & pasta dishes). Im being serious when I say that if I named my favorites I would practically be naming the whole menu! The owners are also there a lot, very friendly, and working hard, which I think is really cool! I also went to meet up for lunch with a colleague and we lost track of time;not once did they rush us out or even say we needed to leave. I felt bad about it, but they just smiled and said its okay! This place is always busy, but it never seems to interfere with their exceptional quality of food and service. The only con I can think of is that I wish they were open later!

I would have never thought to try this place based on the outside. Thankfully a client took me to lunch yesterday. There was a line out the door inspite of the rain and it was worth it. All the food looked great. I had a Toasted & Roasted salad with salmon and it really was perfect. The salmon was tasty and the combination of pine nuts, roasted potato (I know weird), feta cheese, onions was just perfect. Most of the other diners seemed to get either the greek pasta, or the special (meatloaf) both of which also looked wonderful. This was the best thing I've ever had in Cleveland.

Traveling on business again... My host suggested Tastebuds for lunch - WOW! What a great lunch! I had the Greek Pasta, the house specialty and it was great. A full plate of pasta with olives, artichokes, pine nuts, seasoning, chicken, and lots of other awesome stuff that I can't remember. A very filling meal for $10. A couple other folks in our party had the daily specialty - a southwestern chicken fish and they were also very pleased. This place is hard to find... Its in an older, brick building and there's no obvious sign so trust your GPS.

Honestly, I've loved everything I've ever had from Tastebuds, but I have a love affair with the almond crusted tilapia they serve as a special on Fridays. It comes with wild rice and green beans. The sherry beurre blanc sauce they drizzle over the fish and rice is nothing short of amazing. It's a bit expensive, but the quality and portion sizes make the price more than fair.

Everything at tastebuds is amazing! The atmosphere is great, and the owner is also pretty great! :) You HAVE to eat here!

Came for a work lunch and got the mushroom sandwich. The sandwich was delicious and the atmosphere was great. Will definitely be back.

Absolutely delicious!!!!!! Great service warm and welcoming! Definitely worth finding. Nice laid back environment with a lot of food options. Will return. Closes early though at 2pm.

Love. I just finished eating here and I already can't wait to come back. First, I was blown away by the fenced in free parking. No need to find a meter or lot like most restaurants downtown. I walked in and there was a line. I grabbed a menu to look at, but I'd recommend maybe looking at the menu before coming so you don't hold up the line. I ordered a veggie wrap and the pasta salad. The line moved wayyyy quick, and before I knew it I was paying. Wrap, side, drink, 10 dollars. And it was DELICIOUS. The service was also really friendly. Some reviews comment that it's overpriced, but not in my opinion. This blows all the other lunch options around here out of the water, and it's comparable in price. Also, I could have easily just had the wrap or just the pasta salad and been satisfied, I just felt like stuffing my face and got both. Even with both, it was worth the 10 bucks. Lots of vegan and vegetarian options, healthy options, and a few unhealthy options and homemade desserts. This is cafeteria style, but there is plenty of space to sit in the nice dining room. I'll be back! Oh, pro tip: you clear your own plates. I had to wait a bit to see what other people did with their dishes.

There is something for everyone at Tastebuds

whether you're vegetarian, dieting, or craving made from scratch comfort foods